Resistance welding is a process which joins two or more layers of metal using the electrical resistance between the mating surfaces. The process relies on many controllable variables, where each plays a specific role in the creation of the weld nugget. The resistance welding operation is controlled by various specifications created by customers in the aerospace, naval, defense, and other sectors. The specifications control the minimum allowable weld size, the acceptable internal and external defects, and the intervals for testing requirements. These tests must be completed to verify the weld inside of the production parts is acceptable per the specification. The tests are completed with a simulation joint of the part using weld coupons supplied by the customer.

Weld coupons are needed for a variety of reasons. Each welding specification calls out for certain welding tests to be done depending on the class. These tests include examining the weld at various stages of the process, at the start, in process routine testing, and at the end of the process. Additional tests are also required to certify the welding process, called a welding schedule. The number of tests is defined by both weld class and the material group, each defined later. These tests include metallurgical examination, physical shear testing or a combination of both depending on the specification requirements. The tests are paramount as the integrity of the weld joint must be verified so that any chance of failure is eliminated.

Metallurgical examination includes the welding and sectioning of the samples to examine the inner characteristics of the weld. The coupon is welded and then the exterior surfaces are examined for any obvious defects. If no such defects are present, the coupon is then sectioned using metallurgical equipment, polish, and acid etched. The polishing and etching process contrasts the weld nugget compared to the base material. The weld nugget and the entirety of its potential defects can then be examined under a microscope. The weld defects can range anywhere from large voids to hairline cracks within the weld nugget, as well as cracking extending into the base material. Coupon examination is very important as any of these defects can alter the strength of the weld. It is paramount that the coupons are welded and sectioned so that there can be a depiction of the actual welds within the part.

When a job is first received, it is important to note which material the parts are made of. The type of material will determine if the weld will be short and hot or longer with less heat being applied, as well as the type of electrode. There are three major types of materials as defined by the most commonly used specifications. These materials are grouped into aluminum and magnesium alloys, ferrous and nickel alloys, and lastly titanium alloys. The groups are defined as groups one, two and three respectively. Certain groups are much more difficult to develop a welding schedule for, and as such would require more testing material.

Group one is the most difficult material group to join. This group consists of all aluminum and magnesium alloys. Resistance welding is the only way to join various aluminum alloys, including the 2000 series and 7000 series alloys. These two families are highly prone to stress fractures when attempting to join via GMAW (Gas Metal Arc Welding, MIG) or GTAW (Gas Tungsten Arc Welding, TIG) processes. As such, resistance spot and seam welding are the only ways to reliably join these alloys. The resistance welding process for almost all aluminum alloys requires attention and specific care to create a strong and reliable weld. For more information, please reference the aluminum spot welding blog post linked HERE. 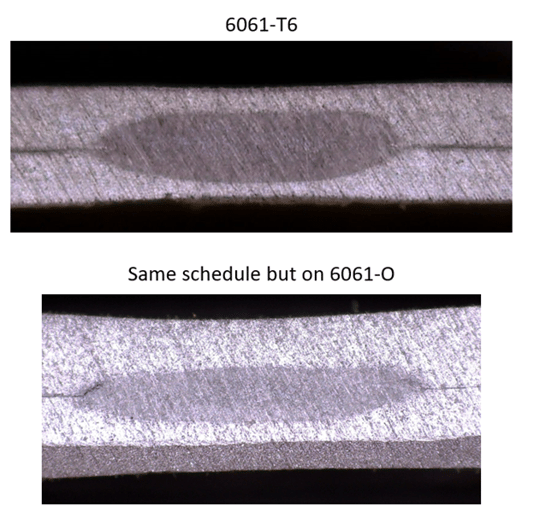 Even through the resistance welding process, cracks and voids are common if an unskilled operator attempts to join the pieces. If the alloy is heated too quickly and cools too fast, cracks will form within the weld nugget. If the alloy is not clean and oxide remains on the surfaces, the weld nugget will most likely not have enough penetration or be undersized. If other contamination exists, porosity will likely fail the coupon. If too much current is applied to the part, the weld nugget will extend to either surface, causing a defect called surface expulsion. This is where the molten nugget extends from within the part to the exterior of the part. For an inexperience operator, it is common to see these imperfections, and in some cases, they may even blow a hole through the part. To avoid these imperfections, the operator must juggle and balance the amount of heat put into the part, the duration of the weld, as well as the amount of weld impulses being sent into the part.

Aluminum alloys are also very susceptible to excessive indentation. This can be avoided by choosing the softer class one electrodes rather than the harder class threes. But this adds another potential problem into the mix. The softer electrodes are more susceptible to deformation, copper deposits onto the surface of the spot weld, as well as material transfer from the part onto the electrode face. All three of these are important defects to watch out for and are easily preventable by simple electrode maintenance.

The surface resistance of aluminum is also a tough variable to control. Aluminum oxide forms quickly on the bare surface of cleaned aluminum. This oxide layer is difficult to weld through as it increases the surface resistance which does not alloy the current to easily pass through the metal. As such, once the parts are cleaned, they must be welded within a certain time frame. The shunting of the current through adjacent welds is also an issue that needs attention. If the welds are close together, some of the current will follow the path of least resistance and shunt through the close by weld. This results in a smaller weld with potentially reject-able penetration and size.

Group one materials require many more coupons to certify the welding schedule due to the potential for defects stated above. Aluminum parts are more likely to have the strict class A weld requirements as well. At a bare minimum, twenty-five coupons are needed to just pass the x-ray certification requirement. Class A welds also require more frequent testing intervals as stated previously. More coupons are required by this standard, and at least fifty strips of material for each detail in the joint is a common need. The extra coupons are used for routine testing, class A having the strictest time-interval requirement of testing every hour. However even with the high possibility of defects and strict testing procedures, Lynn Welding excels at welding mission-critical aluminum components.

Groups two and three are much easier to weld together compared to the first group. Group two includes all steels, irons, inconel and cobalt alloys. Group three includes all pure titanium and titanium alloys. Along with group one, these two material groups are very commonly used in the resistance welding process. Welds for these groups are much more commonly accepted, as it is easier to achieve an acceptable weld schedule. However, the process testing and process certification are still important to complete before beginning the production of parts.

Defects in these two groups are much easier to control and eliminate compared to the aluminum alloys. Cracking and voids within the weld nugget are the most common defects in this group. Cracks begin to form in the weld nugget when molten metal solidified too quickly. The stresses in the joint cause fractures, which in turn weaken the joint. Keeping the metal molten for a longer period of time and using a setting called forging helps eliminate these defects. The longer weld time and excess forge-force help the molten metal fill in any voids and cracks. These filled in defects show up in the macro-image of the metallurgical etch, which is called coring. Coring is not considered a defect in most specifications but is an abnormality to keep an eye on. 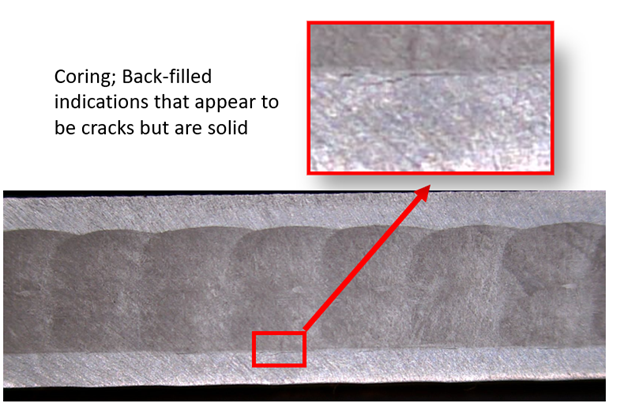 Coring within an inconel seam-weld sample. Coring is most common in inconel and aluminum alloys

One extra requirement for the resistance seam welding of titanium alloys is the control of the parts per million (ppm) of chlorine in the flood cooling water. Not all specifications call for this requirement, but it is easy to comply with an external pump setup of distilled water.

Groups two and three still require certification tests to weld a specific joint, but much less samples compared to group one. For the mission-critical class A welds, most specifications require fifteen samples or less to pass x-ray inspection. The routine testing requirements are the same as the first group, with three samples needed every hour of production. As such, these two groups will require a minimum of thirty coupons per detail for any of the three classes.

Lastly, we often get the same question from our customer, ‘Why do you require so much testing material?”. Using D17.2 and a class A aluminum weld as an example, we would need a bare minimum of 50 coupons as required by table 6. This number does not include the number of coupons required to develop the weld schedule, or to conduct the routine testing. In D17.2, table 13 lists the testing requirements while section 5.2.2 lists the intervals. We would need to use six coupons at the beginning, every hour after the start, and at the end of production. This number adds up quickly and using over 100 coupons is a common occurrence. 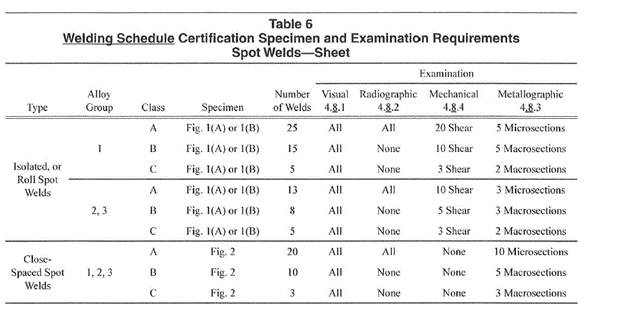 Since 2006 Lynn Welding has been approved for resistance spot welding per AWS D17.2.
Start Reading